It explains the terms and process involved in the programmatic advertisement. 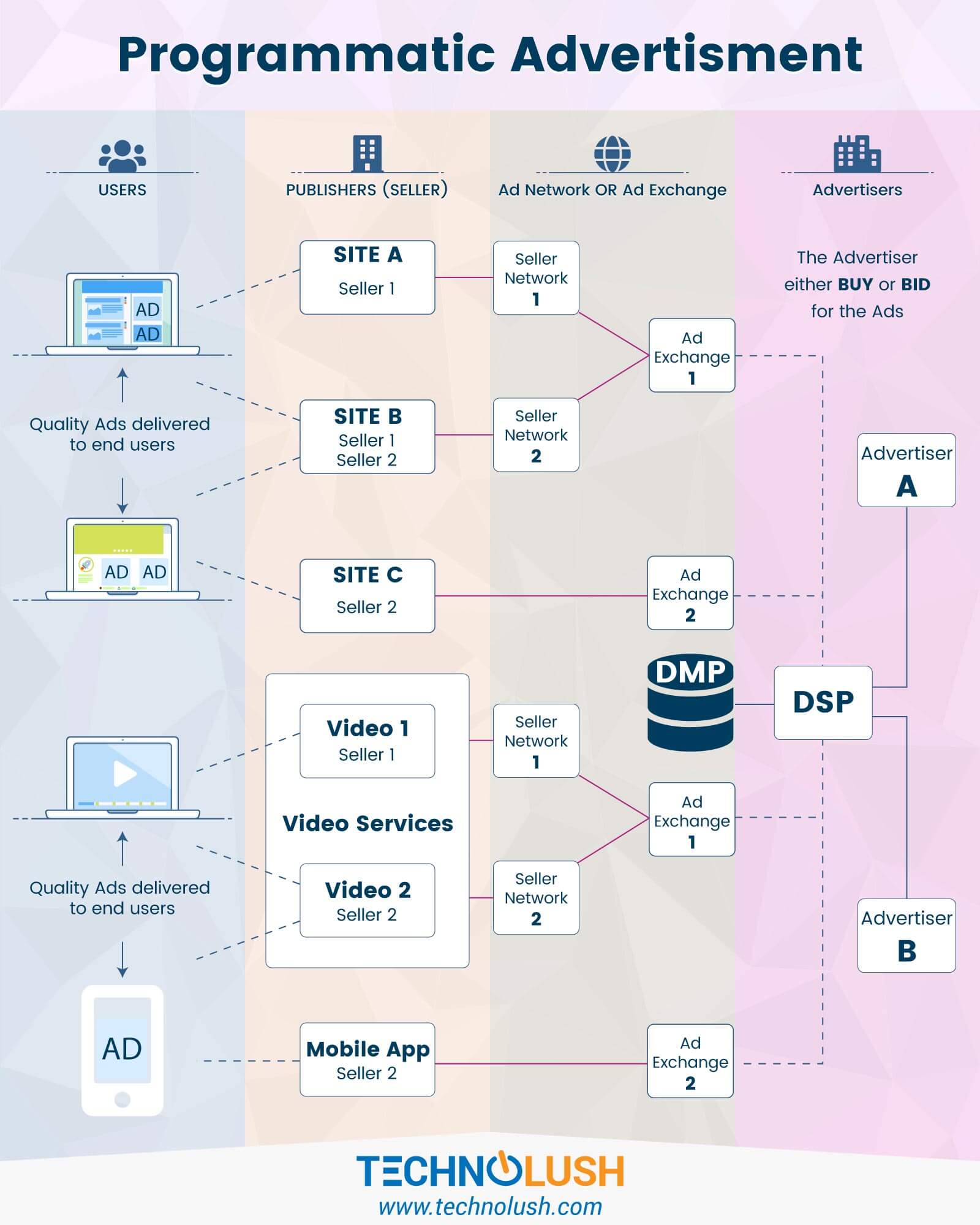 Programmatic Advertisement is an intelligent, data-driven process where buying and selling of the ad inventory is fully automatic without any manual negotiations.

Programmatic Advertisement as it sounds works via internet and done for the online advertisement to display ads on websites, mobile applications, and online videos. This post covers the important terms, stakeholders, and process involved in the programmatic advertisement universe.

The advertisers can select the networks to serve their ads and set goals to achieve the desired traffic. The analytics platforms further provide the required statistics to analyze the effectiveness of each ad campaign run by the advertisers.

Notes: The infographic and rest of the post tried to explain the terms and stakeholders on a high level. The actual scenario and usage might differ. You may also be interested in How To Declare Authorized Digital Sellers Using ads.txt? to prevent counterfeit inventory.

Real-Time Bidding (RTB) is a technology involving an automated process that allows the ad inventory to be bought or sold on a per-impression basis via an auction format. In RTB, multiple advertisers bid for the inventory and the winning bid will be displayed on the inventory forming an impression.

The advertising inventory can be defined as the number of advertisements or the amount of available ad space provided by the publishers for advertisement at any given time. It can be valued in terms of the site traffic or impressions that the publisher can deliver to the advertiser.

The advertising inventory provided by a publisher can include display(pre-defined spaces, pop-outs, or pop-ups) on a website or a mobile application. Nowadays, videos have become the primary target of advertisers to reach the target audience. The popular online videos show in-between ads with the maximum reachability and engagements of the targeted audience.

In very simple terms, an ad exchange is a marketplace where publishers and sellers can sell ad inventory and the advertisers can buy the inventory programmatically via RTB. An ad exchange connects to multiple ad networks and other exchanges forming a single platform in the form of a marketplace which makes ad inventory from multiple ad networks available for purchase by the advertisers. The entire process is automated and works via Real-Time Bidding (RTB) technology to buy/sell inventory and determine prices on a per-impression basis.

The inventory available on the ad exchange gets auctioned and the highest bidder gets the sale to display ad forming an impression.

The Demand Side Platform (DSP) is another programmatic platform complementing to the SSP. The DSP connects the advertisers to multiple ad exchanges and automates the process to programmatically buy or bid for the inventory provided by the publishers via the ad networks connected to the DSP.

It's the DSP where advertisers can analyze the inventory, buy or bid for the inventory and target their ad campaign audience. The DSP further interacts with the ad networks via RTB APIs and helps the buyer to assess the inventory by providing the necessary information including inventory cost, ad placement, etc.

The Data Management Platform (DMP) collects data and integrates with DSP so that the advertisers can run effective ad campaigns and target the appropriate audience.

The advertisers are ideally the businesses looking forward to increasing their sales via online marketing channels. The programmatic advertising either via RTB or Programmatic Direct has become their primary choice to promote the business and products to increase the overall revenue by several folds.

With the involvement of Artificial Intelligence in the programmatic advertisement, the best ad placement can be bought real-time based on user's demographics including location, device, interest, etc.

The publishers control the digital content floating across the internet and make sure that the content is interesting and relevant to the audience so that it can have more views. The publishers define the ad inventory on their websites, mobile applications, and online videos.

In most of the case, the publisher itself is the seller, though a publisher can allow multiple sellers to sell their ad inventory. The sellers provide the display inventory to serve targeted ads to the end-users.

It's the crucial part for every advertiser to ensure that the ads placed by them reach the interested audience and the ad should sound familiar with them. With the involvement of programmatic advertisement, it's the user who is the primary target to display ads irrespective of the website visited by them. There are several agencies which collect the user data from the browsing history, the free services including all the major social media platforms where user data is provided directly by the user. The same data will be mined to target the ad audience so that the ad reaches the relevant audience hence increasing the probability of making sales. In several cases, the browsing history of the user is being utilized by this system to gather behavioral information.

With the involvement of RTB and AI, the advertisers can effectively choose their target audience based on the audience characteristics and behavior.